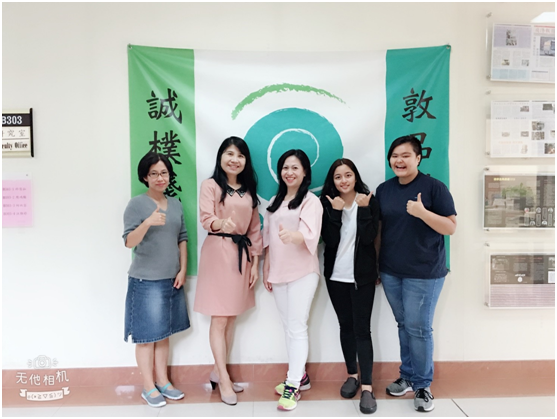 The results of the [Public Transportation into Campus] micro-film selection competition held by the Gemalan Bus Passenger Transport Station have recently been announced. The micro-movie video production competition, composed by the Department of Communication of Foguang University, Yan Yaling, Li Mingyan, and Zhu Yuyu, formed the "Miss Bus" production team. Using the humorous and funny approach, the theme of "DRTS allows us to create endless possibilities" is to promote the Gemalan Passenger Transport DRTS. The concept of campus sharing and the interpretation of the APP function of DRTS have been well received by the judges and confirmed by the first prize of such works.
Associate Professor Xu Mingzhu and Director of the Department of Communication at Foguang University pointed out that the courses of the Department of Communication of the University of Buddhism attach importance to the theory and also attach importance to practice. After the students of this school have passed the education of both the Faculty and the Faculty of Buddhism, they applied their knowledge and participated in this Gemalan. The micro-movie competition of automobile passenger transportation can stand out from the crowd and represent the direction of the professional development of our communication department. It is recognized by our society and also the ability of our students to be seen. Foguang University will continue its efforts in the future to train more outstanding students to enter the social field and to provide more true, kind and beautiful services for the society.
Instructor Zhang Qilin mentioned: "The Miss Bus Production Team is the most strategic and executive team in the student team that I have guided by the Department of Communication at Foguang University. This team is fully playing in the process of the project. The ability to learn, to produce a professional level of work, the performance of the team is very worthy of recognition."
Gemalan Passenger Li Lili said: "To promote the DRTS campus ride, the first poster design and micro-film competition will be held. With the participation of students and the ideas and ideas of the students, the DRTS Gemalan Passenger Campus will be shared and more popular. Foguang University and Tamkang University on the Meimei Mountain in Jiaoxi. I am also very grateful to the cooperation between Foguang University and Tamkang University. During the competition, students will learn more about the purpose and significance of the DRTS Gemalan Passenger Campus Campus. The winning entries will be displayed on the official website and on the Gemalan passengers for passengers to enjoy.
As a graduate of the "Miss Bus" team leader, Yan Yaling, a student of the Communication Department of Buddhism, said that the theme of the group just coincided with the core link of friendly transportation. I saw the poster on the wall of the school "DRTS Gemalan Passenger Campus Campus Micro Film Competition" With the help of the ingenuity, we can practice the knowledge and skills learned by the Department of Communication in the course of the competition through the micro-film competition. In addition to the marketing of the Buddhism Communication Department and the DRTS Gemalan Passenger Campus, we can also let the students of the same group Concentrate on the heart and discuss each other as a process of learning from each other. Therefore, the invited members Li Mingyan and Zhu Yuyu participated in the competition.
Li Mingyan said that the first time with Yan Yaling and Zhu Yuyu to participate in the competition, it was also the first time to participate in the micro-film competition. The team used a short time to discuss and run-in, and the instructor Zhang Yulin and his classmates discussed the online video conference. In fact, the weather on the day of shooting was quite bad. Except for the fog and the rain, we spent a lot of time in the later editing and production, but we overcame the difficulties and presented the images perfectly in the only time. The first time I won the prize, it really gave us a lot of encouragement!
After the bus Miss team's planning, I hope to pass the graduation production of the 104-level Foguang University, telling the story of the life of the passengers in Yilan, Taiwan, using effective online new media, bringing in the people's new feelings and profoundness to Foguang University. I will recognize the three good values ​​of "Speaking Good, Doing Good, Keeping Good" in Foguang University's Sanhao Movement and combining the "pure and friendly, optimistic and enterprising" principles of Gemalan Passenger Transport to connect with local social enterprises and engage in public welfare with social enterprises. The spirit of the society drives the truth, goodness and beauty of society. I hope that through the efforts of this team, I will benefit from the friendly passenger culture.